Where research and capital converge for good

An estimated 272 million international migrants make up not only a large and growing share of the world’s population, but also a significant portion of its workers. The current pandemic has brought to light the critical infrastructure sectors which form the backbone of functioning society (see also COVID Research Series #3), as well as the industries it has impacted most in terms of mass layoffs. Foreign-born1 workers – which includes international migrant workers, temporary workers, undocumented immigrant workers and others– are disproportionately represented in these industries and are among the most impacted communities within the global workforce.

In this research brief, we highlight the current state of the foreign-born workforce in the context of COVID-19, as well as the issues that have arisen as a result of the pandemic that most keenly affects this population.

Foreign-born workers in the context of COVID-19: a snapshot

There is an estimated 164 million international migrant workers in the world. Identifying where these workers are concentrated – both in terms of geographies as well as occupations – is crucial to understanding how foreign-born workers specifically have been impacted by COVID-19, and how they have contributed to the pandemic response.

Among the 15 countries with the largest number of confirmed COVID-19 cases, immigrants make up more than 10% of the population in at least ten countries, according to data from the United Nations. Compared to the average of just 3.5% of the global population accounted for by international migrants, it appears that countries hardest hit by the current pandemic have a comparatively high density of immigrants.

These foreign-born individuals can – and often do – work in frontline occupations that are critical to the fight against the current pandemic, such as healthcare. As an example, it is estimated that as of 2016, 47% and 33% of doctors in Switzerland and United Kingdom (two of the countries in Europe most affected by COVID-19), respectively, are foreign-born.

At the same time, foreign-born individuals are disproportionately represented in sectors facing the largest layoffs due to the pandemic. For example, foreign-born workers account for 37% and 20% of all services and sales workers in Switzerland and Spain, respectively, while they only account for 30% and 13% of the countries’ populations. These individuals’ higher propensity to be employed in sectors with greater risk of layoffs and furloughs place them in danger of job insecurity.

Looking at the US specifically, a similar story persists. Out of the estimated 50.7 million foreign born individuals in the US, 6 million are working in industries at the front line of the pandemic. Exhibit 1 shows the share of foreign-born workers in fields that are vital to the response to COVID-19, as defined and compiled by the Migration Policy Institute. Although foreign-born workers account for only 17% of the US workforce, in certain vital industries, such as public transportation and agriculture and forestry, they can account for more than 25% of workers. The concentration of foreign-born workers is even more stark when considering specific occupations within industries like health care and social services that play a highly critical role in the COVID-19 response: 29% of all physicians and 38% of home health aides are foreign-born, for example. 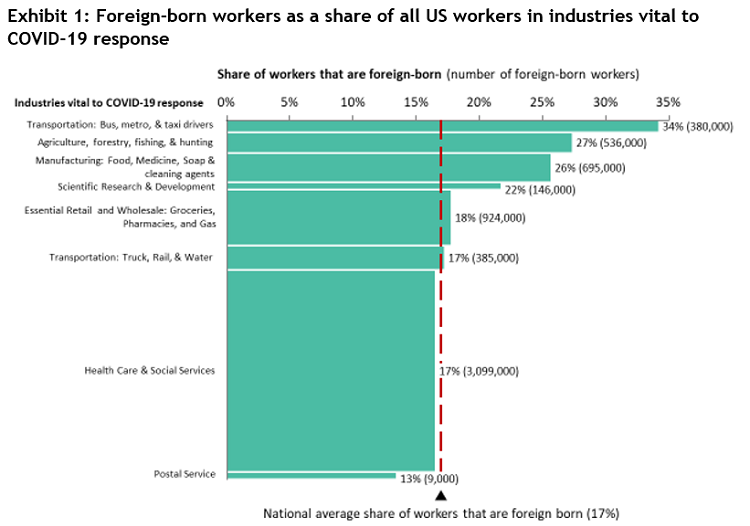 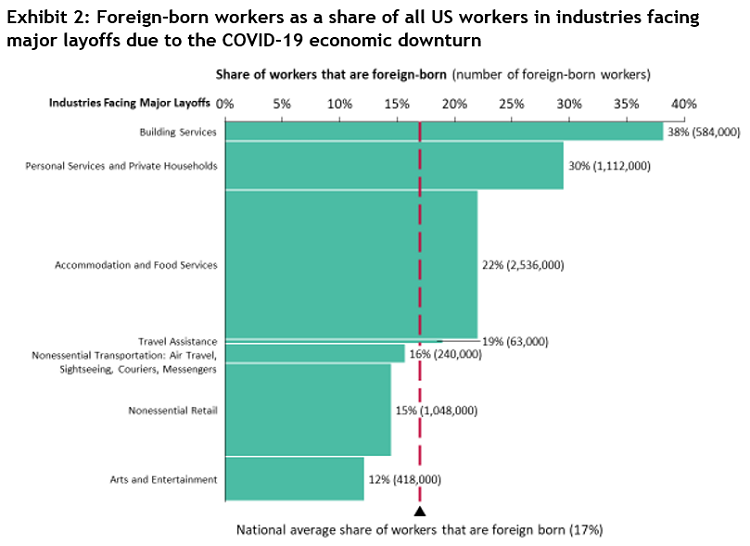 An example of how the pandemic has affected the lives of foreign-born workers in the state of New York is illustrated in Box 1. 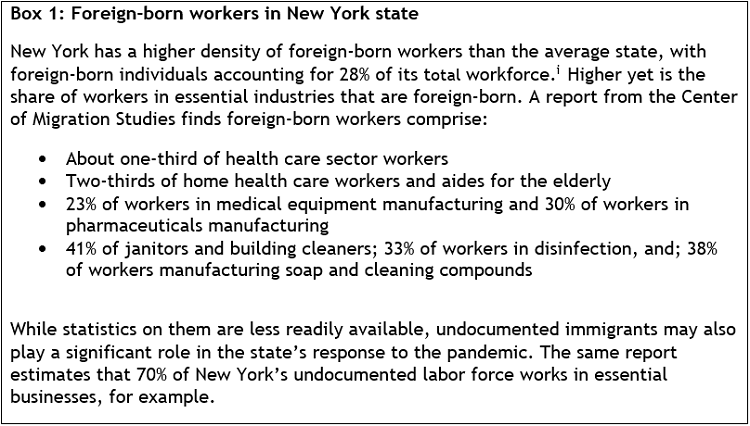 i Source: Center for Migration Studies of New York (April 2020)

In addition to foreign-born workers’ disproportionate representation in industries that are at the frontline of the COVID-19 response or that are heavily impacted by the pandemic, there are a number of factors that make this population – and their dependents – more exposed to the impact of COVID-19.

Around the world many countries have closed borders, suspended asylum programs and issued stay-at-home orders, which, together with interruptions in global transportation, has drastically curbed migration around the world, particularly from poorer nations to richer ones. Once crowded migratory routes that led from South America through Central America to the US have gone quiet, as the current administration has closed the border to almost all migrants.

Similarly, the number of East Africans crossing the Gulf of Aden to seek work in the Gulf States decreased by around 24% during the first months of 2020; while from January to March 2019, approximately 37,000 migrants crossed the Gulf of Aden, fewer than 28,000 made the same journey in the first quarter of this year.

According to the International Organization for Migration, eight of the 15 countries most affected by COVID-19 - the US, Switzerland, Germany, Russia, China, France, the Netherlands, and the UK - were also among the 15 countries from which the highest amounts of remittances were sent in 2018. Remittances from these eight countries made up more than 25% of all global remittances in 2018.

Not surprisingly, remittances are expected to exhibit a sharp decrease this year. Before the COVID-19 crisis started, the World Bank Group (2019) had projected that $574 billion would be remitted to low- and middle-income countries by the end of 2020. However, job losses and difficulties in sending remittances during shutdowns have reduced that estimate by 22% (to ~$445 billion). Some of the largest impacts will be felt by Europe and Central Asia, sub-Saharan Africa, and South Asia, where remittances are expected to fall by 27.5%, 23% and 22%, respectively in 2020 (Exhibit 3). This is especially concerning not only given how important remittances are for the wellbeing of migrants’ families but for their home countries as a whole: in several countries in Africa, Asia and Latin America, remittances represent over 20% of GDP.

In addition to the negative impacts of reduced work opportunities and the ability to send remittances, many foreign-born workers are excluded from country-level relief packages. In the US, for example, taxpayers can receive up to $1,200 as well as $500 for each of their children under age 17 as part of the $2 trillion Coronavirus Aid, Relief, and Economic Security (CARES) Act. Undocumented taxpayers, however, are not eligible. The CARES Act also excludes anyone filing jointly with an individual tax identification number (ITIN) filer, even if that person is a US citizen or green-card holder with a social security number. Thus, in families where even one member files using an ITIN, the entire family is rendered ineligible, thus affecting US-born children of undocumented parents. The Migration Policy Institute estimates that 15.4 million people will be excluded from the stimulus payments due to this restriction. Similarly, in Colombia, COVID-19 related subsidies do not reach the Venezuelan refugee population. As a result, some Venezuelans have congregated, despite the shelter in place order, to protest the government for not helping them. 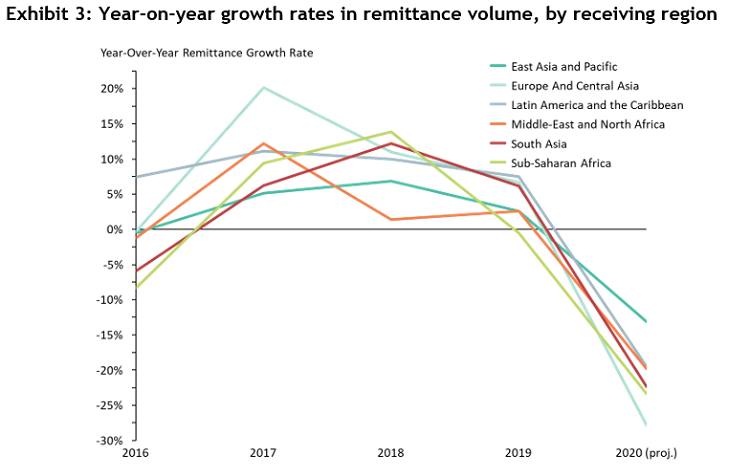 Foreign-born workers often face lower access to healthcare versus the native population. Pre-COVID-19 assessments conducted by the World Bank Group between 2018 and 2020 found that countries provide migrants with varying degrees of access to government-funded health services, depending on their migratory status. The analysis, which covered 51 countries, showed that in half of the countries surveyed, equal access to health care is contingent on migratory status and that 12% of the countries provide migrants with access to only certain health services, including emergency health care.

In the US, while 93% of those born in the country are covered by health insurance, the share falls to 80% for the foreign-born individuals, and just 47% for unauthorized immigrants. Undocumented immigrants have been found to avoid seeking healthcare during the pandemic due to fear of being deported as some hospitals share data with ICE regarding migrant status and engage in medical repatriations. In Singapore, foreign-born workers have long struggled with a lack of medical care, a problem that some experts argue may have contributed to the burgeoning of cases among foreign-born workers. In contrast, Portugal has granted temporary citizenship rights for migrants, asylum seekers, and refugees whose petitions are pending to allow them to access health care.

In Singapore, many foreign born workers live in packed dormitories on the outskirts of the city. These dormitories can house up to 20 people per room, making it almost impossible to follow social distancing guidelines. As the country started experiencing sudden spikes in the COVID-19 cases after the virus was thought to be contained, estimates showed that almost 90% of the new cases were among foreign-born workers.

As the pandemic unfolded, foreign-born workers became not only victims but also vectors, taking the epidemic to their home countries. In Iran, for example, as many as 15,000 Afghan laborers streamed back home a day, spreading the virus around the country. In the Philippines, where more than 10% of the population works overseas, most returning migrants were not screened for the coronavirus, even if they were coming from places with known viral outbreaks. This included nearly 4,500 cruise ship employees, some from ships that were infected with the virus.

Refugees and internally-displaced persons, in particular those living in camps and other overcrowded settings, are amongst the most vulnerable. The top 15 countries affected by COVID-19 host about 9 million refugees, or 3 out of 10 refugees worldwide. Developing countries are in an especially vulnerable position, as UNCHR estimates that most of the world’s 25.9 million refugees are hosted in such countries, where safety nets are weaker. In Colombia, for example, where ~1.8 million Venezuelan refugees and migrants reside, the lockdown brought an abrupt end to the jobs of ~80% of Venezuelan migrant workers estimated to be in the informal sector of the economy, given their work often requires them to be outdoors.  Without this income stream, many were kicked out of their payday rooms, left to ponder the possibility of what was unthinkable a few months ago—returning to Venezuela.

The way forward for migrant workers

The disproportionate impact of the current pandemic on foreign-born individuals and workers has not gone unnoticed. In the US, states like California have announced funds to support undocumented immigrants impacted by COVID-19. Other localities, including Austin, Minneapolis, and Washington, DC have also announced funds that specifically target families that have been left out of federal relief packages, including immigrants. Beyond the US, the United Nations has issued a $6.7 billion appeal to protect individuals in fragile countries, particularly to support families fleeing from wars and persecution.

Multilateral organizations have also issued guidelines for governments to mitigate risks migrants face during this time. For example, the World Bank Group recommends supporting stranded migrants and their access to health, housing, and other social services, as well as supporting remittance infrastructure. Similarly, the UN has highlighted the important role that information plays, especially as communication of preventative measures can help to curb the spread of the disease among vulnerable residents. These actions and more will be crucial to ensuring that foreign-born workers are adequately protected from the risks the current pandemic poses.

Y Analytics aggregates credible findings from leading institutions and researchers. Our goal is to shine a light on the facts made available by content experts and present the implications of these facts. If you have recommendations for additional reputable data sources, insights to help us refine our analysis, or suggested research topics, please contact us at info@yanalytics.org.